The OH technology device uses hydroxyl radicals to inactivate 99.9% of microorganisms, eliminate odors and reduce Volatile Organic Compounds (VOCs) and PM particles in suspension. Although this technology based on Advanced Oxidation Processes (AOP) has been proved to be safe and effective for certain viruses and bacteria, reviewing which are the most prevalent pathogens in educational centers is necessary to determine whether the OH technology is effective in these areas.

The most common infectious diseases among school-age children, mainly affect the upper respiratory tract or the gastrointestinal one [1] [2] [3].

Among the pathogens affecting the respiratory tract, we find: the viruses leading to the common cold (the most prevalent causative agent is Rhinovirus, although Respiratory Syncytial Virus, Parainfluenza viruses, and viruses of Adenoviridae and Coronaviridae families are also frequent), the Influenza virus responsible for the flu, those that cause sore throat (despite it is usually a symptom of cold or flu, in 1 out of 3 cases in children is due to Streptococcus pyogenes -also called Streptococcus group A, which can also cause conjunctivitis-), the bacterium Bordetella pertussis that results in whooping cough, and the bacteria that cause meningitis (the most typical causative agent is Neisseria meningitidis although Streptococcus pneumoniae and Haemophilus influenzae are also relevant). Common cold and flu viruses and bacteria breeding meningitis can lead to ear infections. All of these are transmitted through the respiratory tract by drops and micro-droplets released when speaking, breathing, coughing, etc., and therefore they are susceptible to hydroxyl radicals when they are in the air. 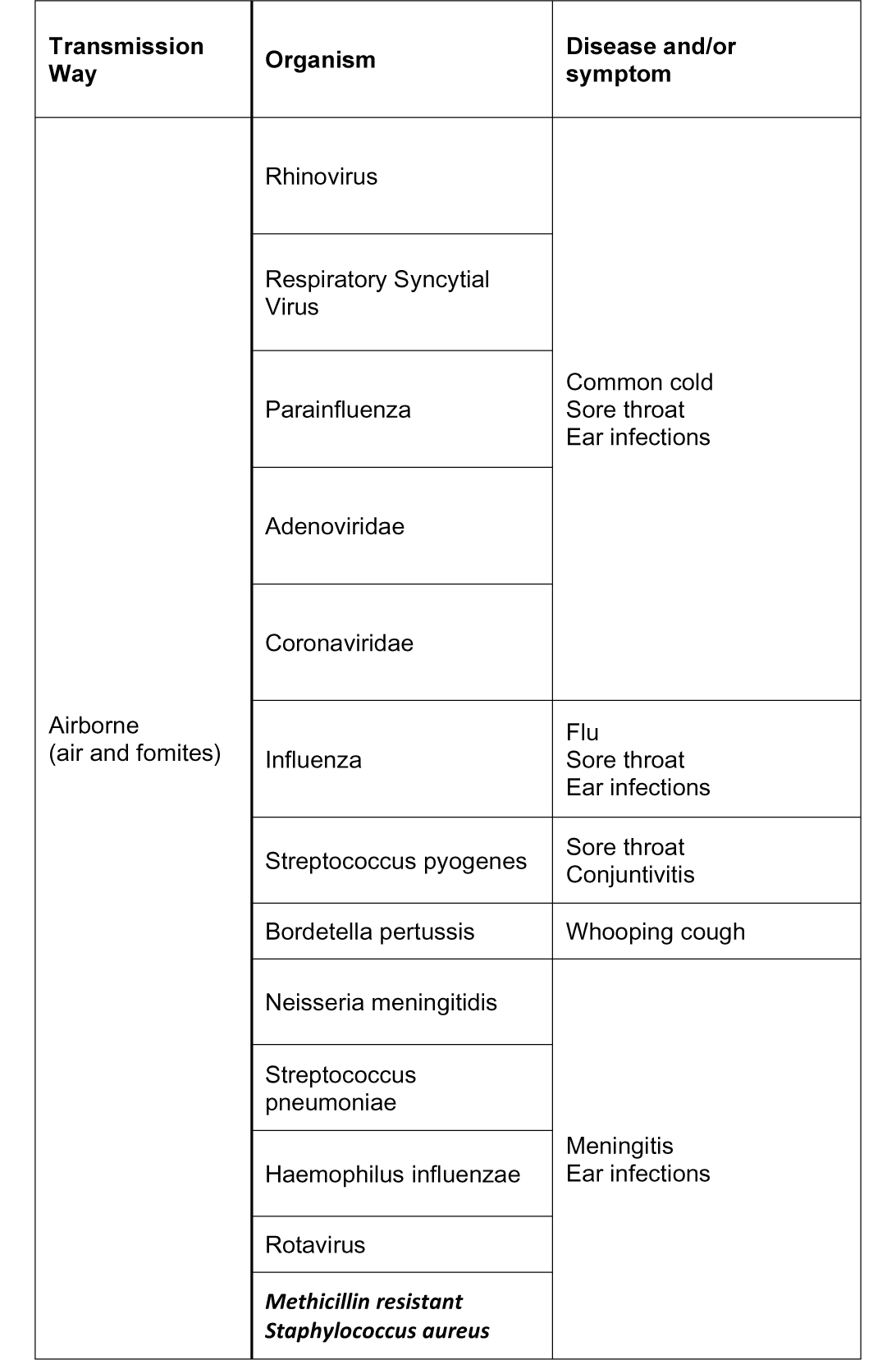 The most common microorganisms causing gastroenteritis in child care centers are Norovirus, Rotavirus and Hepatitis A Virus; the bacteria Salmonella, Escherichia Coli and Shigella; as well as the parasites Cryptosporidium, Cyclospora and Giardia. Gastrointestinal diseases are transmitted mainly by the oral route, but -like those of the respiratory route- the pathogens can remain for some time on fomites (surfaces or objects). 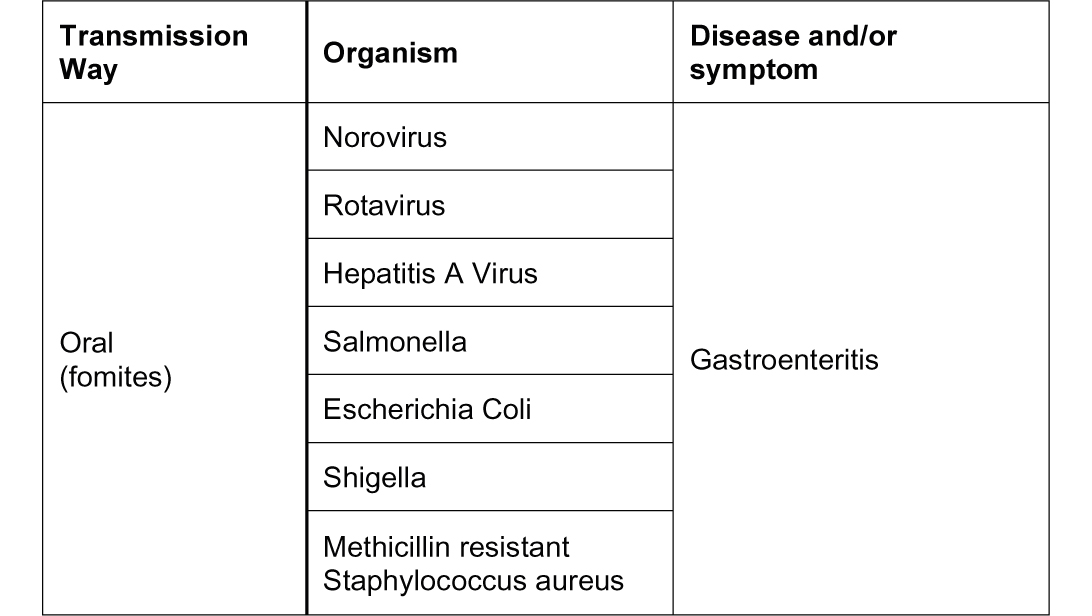 Due to its relevance, Staphylococcus aureus (causing impetigo and very common in classrooms -corresponding to 41% of the total microorganisms present[4]-), Coxsackievirus (causing hand, foot and mouth disease), Hepatitis B Virus and Human Immunodeficiency Virus should also be emphasized. All of them are transmitted via direct contact with fluids or skin. 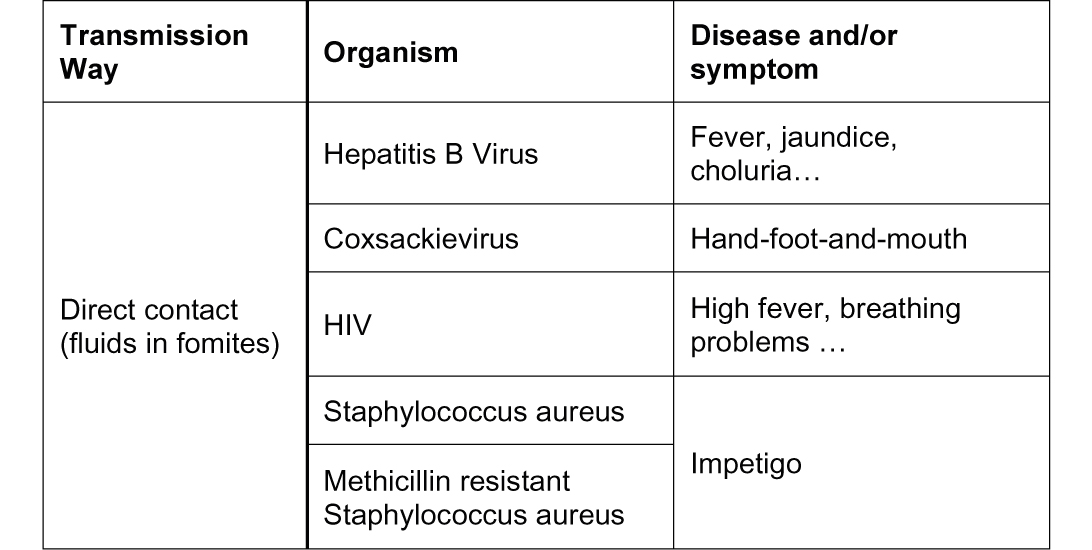 The transfer of pathogens from hands to fomites and vice-versa has been noted in a large number of studies[5]. Depending on the characteristics of each microorganism (such as its external structure) and the environment (such as humidity or exposure to hydroxyl radicals), the time they can hold on a surface will either be extended or diminished. Generally, non-enveloped viruses are more resistant than enveloped viruses, but this is not always true: the enveloped Influenza virus can stand 48 hours on a dry surface, whereas the non-enveloped SARS-CoV virus may survive up to 96 hours, for example.

The effectiveness of OH technology, the air purifier, on seven of the mentioned pathogens has already been tested in different laboratories (see Figure 2) and justified in the paper Vimbert et al.[6]. According to the sampling (air or surface), the humidity conditions, the exposure time to hydroxyl radicals, and the characteristics of each microorganism, the reports show reduction rates of 99.9 to 37%; results that allow us to conclude that OH technolgy is effective in the disinfection and purification of educational areas, protecting our children and teaching staff. 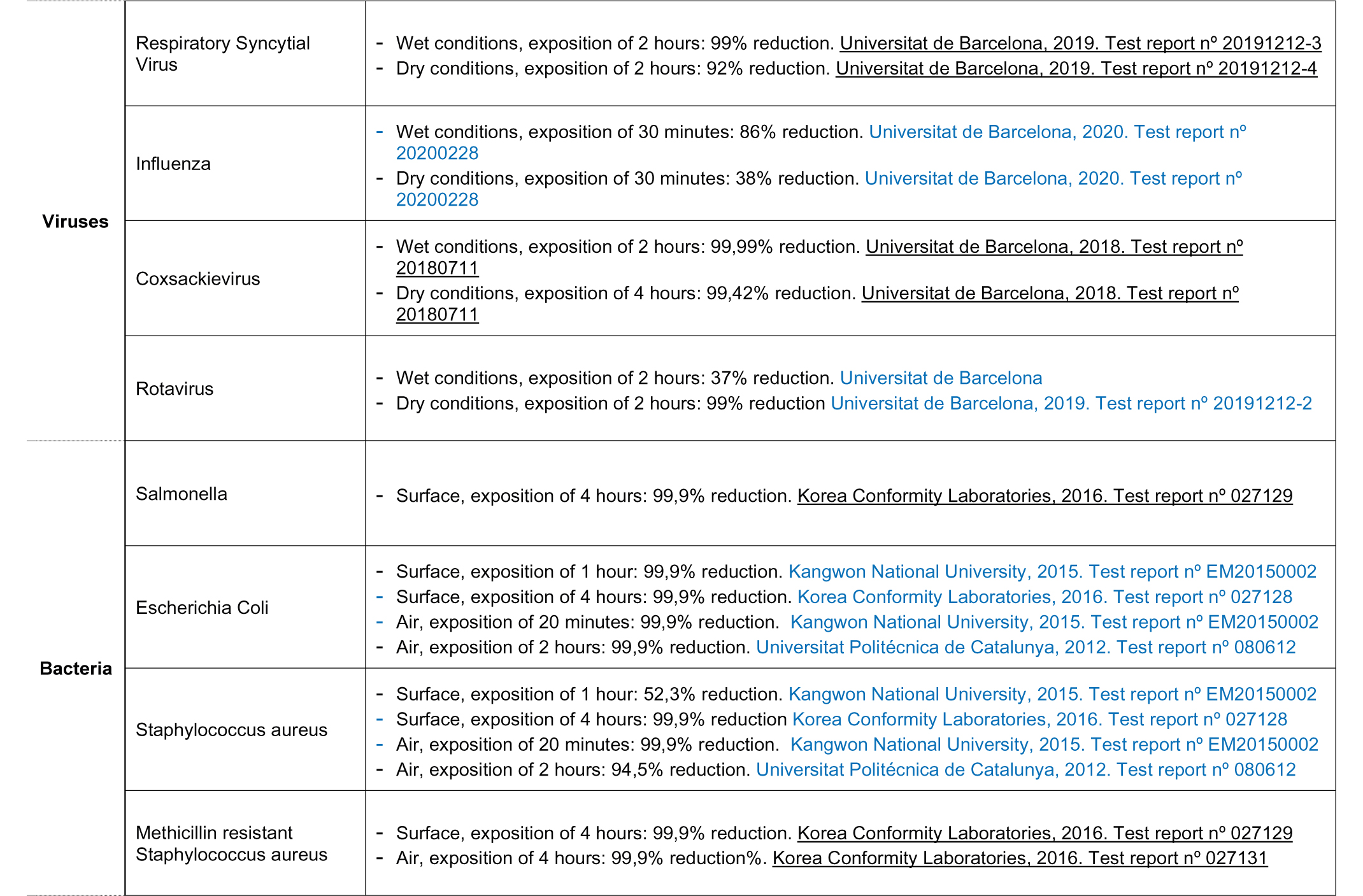